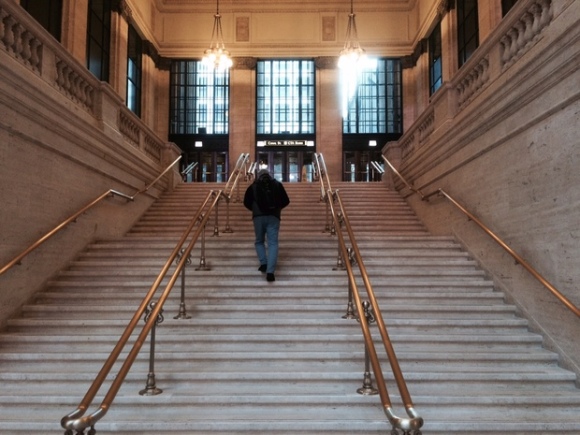 “Remember when we broke into Union Station?”

“You guys broke into Union Station?”

“It was forty below. We were cold.”

“How does that even happen?”

“It was New Years Eve. It was Stacey’s bright idea to take the train. What year was that?”

“Remember what we did then?”

“Well. Todd tried to call a cab, which didn’t work. So then Rob called 9-1-1, which apparently had no interest in the fact that we’d just broken into Union Station.”

“For awhile we did wheelchair races. Then we found the stairs and re-enacted The Untouchables.”

“There’s this famous move scene where Elliot Ness is in this big shootout. Then the cops showed up. The real cops.”

“Tell him about the hotpants in Lincoln Park. Go ahead, tell him.”

“We are NOT talking about that.”

This has been an edition of What Pegman Saw. To read more stories inspired by the location, click here.

Excuse the trip down memory lane. I have so many Chicago memories, but this is a favorite.

PS Mom, did I ever mention this?

PPS To those of you who see the InLinks–OMW the hair. My hair was as big as I was. What was I thinking?