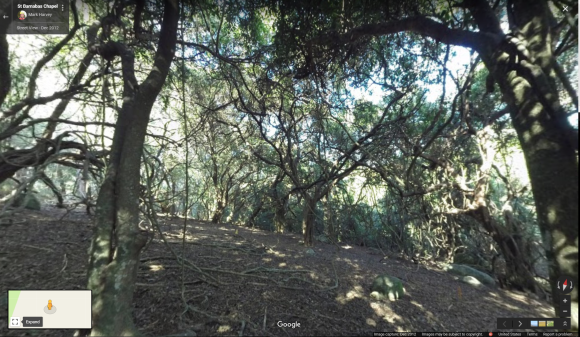 They scanned the empty beach doubtfully.

“Why don’t you stay here?” he said. “I’ll head inland, see if I can’t find someone to take a look at that mast.”

The clear path narrowed into a thick jungle clotted with boulders and choked with vines. Somewhere behind, him a branch snapped.

“Jenny? Is that you?” He peered back in the dim of the darkened canopy. His scalp prickled in the waiting silence.

He laughed at his own foolishness. Twenty days of open ocean had made him loopy. He started forward, only to trip on a root that snaked just under the surface. He moved to pull himself on all fours. A vine was wound all around one ankle. He laughed, tugging.

The vine tugged back.

“What the—” he started. A choking rope of vine slithered fast around his neck.

This has been an edition of What Pegman Saw. To read more stories inspired by the prompt or to submit your own, click here.

There were some interesting sights in this location (Norfolk Island) including this spot and eight others that were arranged in an oval around it. I noticed red pegs and white pegs and strange little statues. Like at the one above you can see what looks like a stone bird statue. Does anyone have any idea what this is? I was guessing some sort of golf game, but it’s unlike any golf game I’ve ever seen! Maybe a crazy bow challenge?