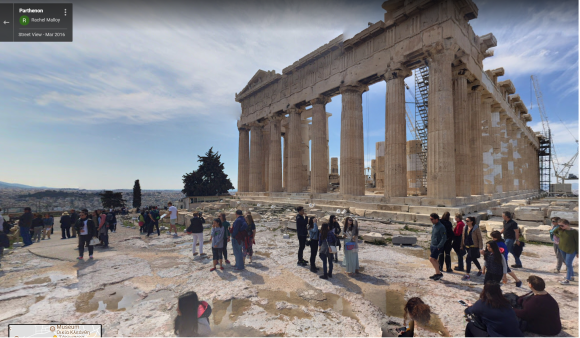 It wasn’t just the fact that Tad had flirted with the waitress at the reception, or that he’d vanished for nearly five hours without explanation when they docked in Salerno.

“He’s only marrying you for your money,” her best friend had cautioned. It appeared she was right.

Ellie tripped and stubbed her toe on a rocky outcrop.

“Klutz,” he snorted. Tad walked away, toward the Parthenon, his eyes on a willowy blonde who was snapping photos.

She bent down to inspect her toe. Not bleeding, at least. Beside it was a smoothly polished oval stone. She turned it over to find an engraved arrow.

She looked up, startled. It was one of those tall, handsome Greeks, this one with with tarragon eyes. “Looks like true love has found you,” he said.

“Not likely.” She glanced at the stone, then back up. Or maybe, it had.

This has been an edition of What Pegman Saw. To read more stories inspired by the prompt, or to submit your own, click here.

Thanks Georgie Moon, for the great location suggestion this week. Greece has always seemed the most romantic of getaways, so I couldn’t resist writing a romance (of sorts).

For anyone interested/wondering about my Women of Courage articles, I’m taking a brief hiatus during the month of November so as to complete the first draft of my latest novel Best Friends for Never. I should be back on track in December.

Thanks for stopping by!