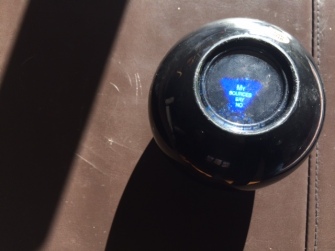 Well how else do you make decisions? Magic 8 Ball says: My sources say no.

So I was reflecting on the year to come and contemplating how to fit it all in. I had paralyzing fear penciled in for the first few months, followed by a six-week self-pity retreat, and I was keeping the summer open for raging self-doubt.

And then I thought: No.

It’s not just that I’ve been keeping secrets from you. Turns out I spend most of my time tharn in the middle of life’s headlights. But enough of that sorry behavior. 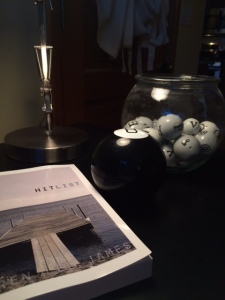 View from the desktop with a galley copy of HitList

This year, I’m going to tell all: about my dream-date query experience with HitList, what Random House said about my book and about those next two novels in the queue.

Look for juicy tell-all posts, good advice on badass queries and how to make agents fight over you. Plus, tips on how to blow it all because you’re going through an ugly divorce.

What’s after that? Who knows. Maybe I’ll even update my Facebook status.

Here’s hoping you are in the midst of your own brave plans for 2015.

1. Turns out you can eat too many sugar cookies.

2. Writing sucks. Here’s why: Somewhere between inspiration and completion lies a battle zone, where muse and inner critic wage war. And here’s a glimpse of what it looks like at my place:

She made a disgusted noise—you know the one that starts with a ‘t’ sound and ends with an exasperated sigh. “You aren’t really going to do that, are you? End a scene like that?”

“‘Told me once, told me a thousand times.’ What did I tell you about clichés?”

“Hmph.” She bends forward, rests a manicured hand on my desktop and adjusts her glasses with the other. She peers closely at the screen and then turns to me, incredulous. “Did you just use an adverb?”

I did. I totally used an adverb. I was in a hurry. I thought it sounded okay. I didn’t think anyone would get hurt. Oh god. There’s just no excuse. Not when SHE’S around.

SHE is inner critic, editor in chief and nothing satisfies her. She’s tall, effortlessly thin. You know the type: power suit, lip-liner and those shoes with the red soles—the-I-can’t-remember-the-name-of-thems.

“Louboutins,” she says with a perfect French accent.

“Wouldn’t kill you to do some research now and then, you know.”

I try to catch the Beast’s eye, but he’s reclining on the other side of my desk, feet up, examining what appears to be a booger at the tip of one filthy finger.

She clears her throat and taps one crimson nail on my monitor. “Are you with me, Karen?”

“Then fix this,” she hisses, her finger underscoring the adverb.

She pulls back. “Oh my God. Did you just attribute my dialogue?”

She throws her arms up and storms for the door, pausing long enough to mutter to the Beast before she leaves: “I can’t work with her. She’s hopeless. Don’t waste your time.”

The Beast does nothing. The door slams and I spend a few moments staring at my hands lying limp on the keyboard.

Finally, I look up and try to snag his eye. “That’s good, right? We can finally get some work done.”

He leans forward and wipes the booger on the underside of my desk. “Maybe,” he says. “If you’d get your ass off that blog.”

Under the category of “Random” and “Stupid Things I Do”, I offer… 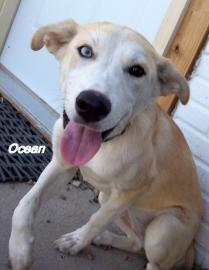 “Ocean” was her shelter handle. When we busted her out, we named her Emma.

She’s part Christmas Ornament Snatcher, part Guatemalan Pillow Eater, part mistake. Up until last Friday, she was incarcerated the local humane shelter. The reason for this is now clear to me.

Don’t get me wrong, I love her. She’s affectionate, smart and outwardly well-behaved. She’s not a barker, biter or jumper. What’s more, this is a dog who seemed to know nothing of sitting, fetching or loose-leash-walking five days ago, who has now mastered all of the above and then some. Heck, the girl had her name down in the first fifteen minutes. Her gift for putting things together astounds me.

She’s whipped us all into shape, herding the kids off to bed or baths and she keeps me fit with sixty-minute home-disaster-recovery-sessions every afternoon. She’s even reached a respectful truce with the cat.

But the girl is just so wily. Her paperwork says part Lab, part Husky. But I watch her… and I think part coyote. I see how she waits until the instant I leave the room to jump on the dining room table. I appreciate the timing and skill it takes to pluck ornaments off the tree without getting caught. Such a clever girl…

The dog has already cost me triple her adoption fee in household damage. Add to that the lifetime supply of dog toys I bought last night to entertain her. But love makes you do crazy things, I guess.

Caution: This post contains hazardous amounts of self-absorbed whininess. Read at your own risk.

I need to tell you something.

The poop query failed. I know – it’s hard for me to believe too. So did another, more thoughtfully crafted query I imagined finely tuned to the agent’s likes and dislikes.

At least the poop query earned a personal response. The latest query – born of over twenty-four hours of research, revising and feedback – got a knee-jerk-lightning-fast-form-letter rejection. Ouch.

I spent the rest of the week contemplating a bonfire with the lot of it. Everything. I was ready to burn things that even reminded me of the book, including my crappy desk chair.

I know, for example, editors rejected Stephen King’s Carrie thirty times and I don’t possess a fraction of the talent the man has in his pinkie fingernail.  Rejection is a part of writing. I must embrace it as a vocation-affirming victory or some happy bullshit. Some writers are rejected hundreds of times and still go on to publish.

Yes, I know it’s only five measly rejections and that’s nothing – and two of them were with a crappy query letter. From a logical standpoint, I understand rejection is not personal and I need to learn and move on. Grow from the experience, right?  I’m aware of the overwhelming odds and the thin rewards of publishing.

The entire prospect of writing – of taking time away from family and friends to do something so vain and self-indulgent is hard to justify. So many times I thought (and think) of walking away.

Not that writing and pursuing publishing is inherently selfish or vain – I’m not talking about you or the other 99.9% of writers. Me, I’m a different story. I’m astonished at my hubris for contemplating the thing to begin with.

On this journey, I got positive feedback from some professionals on Panacea – that it was publishable and full of promise.  I thought … maybe I should do this. And my characters, aka my imaginary friends, nagged and cajoled.

But I don’t think I’m cut out for this … I can barely post a blog entry without feeling like a tremendous gasbag. Look at me! I’m writing! You’re reading the words of a woman incapable of updating her Facebook status.  Every aspect of this is so contrary to my fly-under-the-radar nature.

Here I am posting on the subject. My blog-voice prattles on. I can’t stand to be in the same room as myself and the sad thing is – I can’t leave.  Gah, if you’ve read this far, my apologies. But think how awful it is for me, I listen to this crap continuously.

I can’t believe I opened with poop. Seriously, what is wrong with me?

Okay, so when you’re an aspiring author, here’s what you do – you write a query letter and in that letter you put forth your very best face. You don’t send a manuscript – well depending on the agent maybe the first 5-10 pages, but your query letter can make or break you.

And let’s be honest, it’s not even your whole letter: You’ve got maybe ten seconds, if you’re lucky, to capture the attention of the prospective agent. Show them your mad skilz as it were. Represent.

So what do I do? Well of course, I open with poop. In my defense, the agent in question mentioned poop in a recent blog post, so I was trying to be relevant.  And since my book opens with a flabby expanse of a man’s backside, maybe it’s only appropriate.

I can hardly wait to see what I do for my next trick.